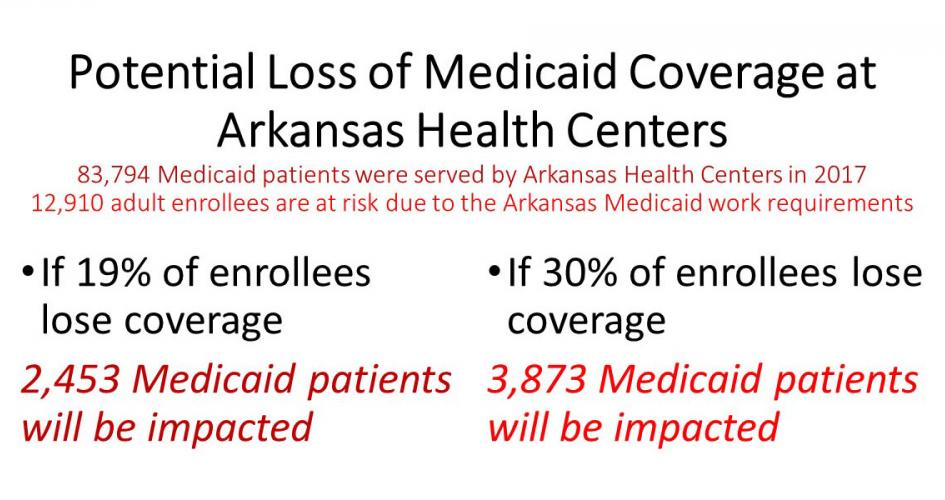 In June 2018, Arkansas became the first state in the nation to implement a Medicaid work demonstration. Two recent blogs examined the enrollment and economic[1] impact of the work demonstration. A companion piece to this blog examining the demonstration’s initial impact on beneficiaries subject to its work/community engagement and reporting rules estimates that between 19 percent and 30 percent of current beneficiaries subject to the requirements – or 30,700 to 48,300 people – will lose coverage over the course of 12 months.[2] Because Arkansas’ policy “locks out” those who fail to comply with the rules for three months for the remainder of the calendar year, it will inevitably lengthen coverage gaps during which people are uninsured.

This analysis assesses the consequences of this widespread loss of coverage on community health centers, which depend extensively on Medicaid revenue. We conclude that coverage losses of this magnitude will result in a loss to the state’s community health centers of $1.5 to $2.3 million in Medicaid revenue. This revenue loss translates into a drop in patient care capacity of between 1,811 and 2,859 patients and a reduction of 6,827 to 10,779 patient visits.

Background
This assessment of the impact of large-scale Medicaid coverage losses is designed to consider the downstream consequences of loss of coverage on health care capacity in low-income, medically underserved urban and rural communities, where health care providers depend extensively on Medicaid to insure their patients and provide essential operating revenue. This analysis focuses on community health centers in Arkansas, which provide comprehensive primary health care in medically underserved communities throughout the state and whose patients rely heavily on Medicaid and have benefitted from the expansion.[3]

Two considerations cause us to focus on community health centers. First, as in all states, Arkansas health centers rely on Medicaid as an important source of operating revenue and represent a major source of health care for Medicaid patients. In 2017, the state’s health centers cared for one in 11 Medicaid/CHIP enrollees.[4]

Second, the Special Terms and Conditions (STCs) established by the federal Centers for Medicare and Medicaid Services (CMS) and that govern the Arkansas work demonstration expressly point to health centers as a source of care for people losing coverage under the demonstration. The STCs specifically instruct the state to inform beneficiaries losing coverage as a result of the new rules that they can obtain free or low-cost primary and preventive care from community health centers.[5] In other words, CMS not only assumes widespread coverage losses, but further assumes that health centers will be able to absorb these losses and will continue to provide care at current capacity. CMS does not indicate what evidence it relies on for these assumptions. The question is whether its assumptions are sound.

Arkansas community health centers
According to data from the Uniform Data System (UDS) – the official federal health center reporting system maintained by the Health Resources and Services Administration (HRSA) within the United States Department of Health and Human Services – twelve federally-funded community health centers served 210,380 Arkansas patients in 2017.[6] This figure includes one in 14 state residents [7] and one in six low-income residents that year.[8] Over the past five years, the number of sites has increased by about one-third and the number of patients by 46,583, or 28 percent (Table 1). In the wake of Arkansas’ Medicaid expansion, the number of uninsured health center patients declined dramatically -- by 41 percent over the 2013-2017 time period.

Arkansas elected to expand Medicaid under the Affordable Care Act (ACA) through a so-called “private option” model. Under this option, most newly eligible enrollees (excluding those classified as medically frail because of greater medical needs, who remain enrolled in traditional Medicaid) are covered through the same private health insurance plans sold in the Marketplace that are available to residents whose subsidies are derived from advance premium tax credits.[9] Thus the same qualified health plans that cover subsidized residents with incomes above 138 percent of the federal poverty level also enroll Medicaid beneficiaries who are part of the expansion population and are not medically frail.

Community health centers serve all residents of their service areas and participate extensively in health plan provider networks. As a result, they enroll both publicly and privately insured community residents, particularly low-income residents whose coverage is subsidized either by Medicaid or premium tax credits.

Projected impact of Arkansas’ Medicaid work requirements on health centers
The companion analysis to this report estimates that during the initial year of the Medicaid work demonstration, between 19 percent and 30 percent of Medicaid beneficiaries will lose their benefits because of their inability to meet work and/or reporting rules. To estimate the spillover impact of these losses on health center revenue, patients, and staffing, we applied this estimate to Arkansas health centers using HRSA UDS data for 2017.

These estimates are conservative. First, Arkansas currently applies the work requirement policy to expansion adults with incomes below 100% of poverty, even though CMS permits it to apply to those with incomes up to 138% of poverty. If the state expands the scope of the work policy, far more people could be subject to work requirements. Second, it is likely that UDS data underestimate the number of people who gained coverage under Arkansas’s Medicaid expansion. Arkansas took an innovative approach in which the Medicaid expansion population was in fact enrolled in the private health insurance marketplaces, not the traditional Medicaid program. Thus, some of the substantial gains in private insurance observed in UDS data actually may represent Medicaid enrollees who could be subject to work due to the mis-categorization of these Medicaid patients as privately insured. These two factors mean that the actual effect of Arkansas’ work requirements may be more severe for health centers than we estimate.

Implications
As CMS has recognized, Arkansas’ community health centers, like those in all states, represent a critical source of primary health care for low-income and medically underserved populations, regardless of their health insurance coverage. At the same time, while federal health center grants represent the largest proportion of operating revenue, health centers rely heavily on Medicaid for the funds they need hire to staff, expand services and locations, and grow their treatment capacity.

Our analysis of the spillover effects flowing from widespread coverage loss among Arkansas Medicaid beneficiaries shows that a major loss of coverage can be expected to translate into a substantial loss of Medicaid financing, leading to an overall decline in operating revenue. With this loss will come a notable decline in patient care capacity, as staffing is reduced, sites are shuttered, and services are rolled back in order to absorb losses. Our previous work examining how health centers respond to threatened funding reductions suggests that sites and operating hours could be targeted for reductions, with staffing reductions increasingly likely as losses remain sustained.[14]

A loss of patient care capacity would, of course, affect the very communities that have most benefitted from the Arkansas Medicaid expansion and whose residents are at risk for Medicaid losses under the work experiment. These are communities where economic prospects are lower, where jobs are scarcer, and whose residents have limited education, more limited experience with the use of internet information systems, and significantly lower access to the online technology needed to navigate Arkansas’ online reporting systems. They also are more likely to lack the transportation needed to reach sources of online reporting assistance, such as the kind of assistance often found at health centers, which offer help with online insurance enrollment and renewals.

A unique aspect of community health centers also has important implications for the impact of the work requirements on the broader population served by health centers. Under federal rules, health centers must seek to serve all patients, regardless of their insurance status. They cannot selectively choose to reduce access for former Medicaid enrollees who lost coverage due to work requirements, but they will lose Medicaid revenue. This will, in turn, force them to reduce staffing levels and curtail operating hours or close sites, thereby reducing overall patient care capacity. This means that the broad cross-section of health center patients, which includes those on Medicare, private insurance and those who retain Medicaid, will have more limited access. It is plausible that service cutbacks will have the most serious consequences in smaller and rural sites, reducing access for many people who are not the immediate targets of Arkansas work requirements policy.

Health centers’ role in providing health care for medically underserved residents is well-documented and clearly recognized by CMS. At the same time, this analysis suggests that, contrary to CMS assumptions, health centers may not be in a position to mitigate the detrimental impact of the work experiment. Indeed, our estimates point in the opposite direction.

These estimates also underscore another concerning aspect of the HHS-approved work experiment in Arkansas. No evaluation design has yet been approved, and no evaluation plan is in place. In allowing the demonstration to move forward in the absence of an evaluation, CMS is permitting an experiment that carries great risk of adverse impact – the elimination of coverage – without ensuring that an objective, well-designed evaluation is in place and fully implemented. The experiment is being permitted to proceed without producing reliable evidence regarding the extent of coverage loss, the factors underlying such losses, or the spillover effects that coverage losses may have on entire, underlying community health systems.

Finally, the STC provision related to notification about health centers clearly suggests that CMS does not assume alternative coverage pathways for those who lose Medicaid. This, of course, is at odds with the justifications for the work experiments that the administration has put forth – a strategy for moving people into alternative coverage arrangements such as Marketplace coverage or employer-sponsored plans. To the extent that the STCs require Arkansas to notify people experiencing Medicaid loss about where they can turn to for free or low-cost care, this suggests that, in fact, preserving and improving insurance coverage is not an experimental outcome the administration is contemplating.

[3] The remaining low-income uninsured were also more likely to have access to care in expansion states due to a more robust and financially viable safety net compared to their counterparts in non-expansion states.  See U.S. Government Accountability Office (2018), Access to Health Care for Low-Income Adults in States with and without Expanded Eligibility. https://www.gao.gov/products/GAO-18-607

[9] Maylone, B. & Sommers, B.D. (2017). Evidence from the private option: the Arkansas experience. The Commonwealth Fund. https://www.commonwealthfund.org/publications/issue-briefs/2017/feb/evidence-private-option-arkansas-experience

"The Projected Effects of the Arkansas Medicaid Work Requirement Demonstration on Community Health Centers" was written by Peter Shin, Jessica Sharac and Sara Rosenbaum of the Milken Institute School of Public Health’s Department of Health Policy and Management.